The Election Commission of India announced the General Election 2019 dates on March 10, 2019. The election will be held in seven phases across Bharat and the final counting of votes will take place on May 23.

West Bengal will vote in the General Election 2019, in seven phases. 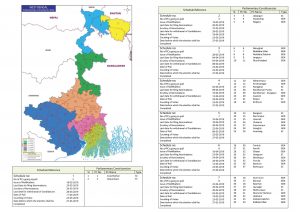 The Prime Minister tweets: “The festival of democracy… are here.” as the Election Commission of India announced the General Election 2019 dates.

The festival of democracy, Elections are here.

I urge my fellow Indians to enrich the 2019 Lok Sabha elections with their active participation. I hope this election witnesses a historic turnout.

I particularly call upon first time voters to vote in record numbers.

The Election Commission of India also set clear guidelines with regards to using social media by political parties and candidates in elections.