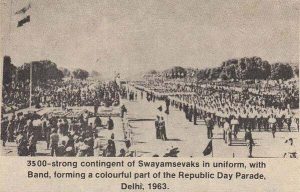 Congress President Rahul Gandhi has once again attacked Rashtriya Swayamsevak Sangh, by comparing it with “Muslim brotherhood” on a foreign land, London. He forgets that none other than his great grandfather Pandit Jawaharlal Nehru, the first prime minister of India, gave a unique honour to the very same RSS by inviting them for their voluntery participaton in Republic Day parade in the year 1963 as a mark of respect for their selfless contribution in 1962-war with China.

It is not that RSS has thereafter changed itself to face criticism and attacks by Congress. It also remains a fact that Congress leaders since India’s independence have been attacking RSS when some of them even link RSS with Gandhi-murder in the year 1948. Rahul Gandhi in criticising and attacking RSS should be bold and fair enough to make confession that his great grand-father made a big mistake by inviting RSS to participate in Republic Day parade of the year 1963.