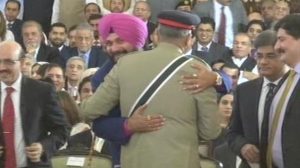 Majority of people in the country including even Punjab chief minister Captain Amrinder Singh have criticized, and rightly too, hugging of Pakistani army chief by Punjab minister Navjot Singh Sidhu who went to participate in oath-taking ceremony of Imran Khan as Prime Minister of Pakistan. It was noteworthy that Navjot Singh Sidhu could not understand diplomacy of his friend Imran Khan when he was deliberately seated next to President of Pakistan-occupied Kashmir.

If Congress party supports the views of Navjot Singh Sidhu that his attitude during Pakistan visit was for peace between two countries, then Congress president shall crown Navjot Singh Sidhu as chief minister of Punjab; because it is for certain that dynastic tradition in the party will never project him as Prime Minister of the country in hypothetical and impossible situation of Congress winning Lok Sabha elections.

Revoking suspension from the party of yet other leader Mani Shanker Aiyer who also became a self-appointed peace maker with Pakistan through showers of love in Pakistan also puts a big question mark on the stand of Congress party on Pakistan sponsored militancy in India.