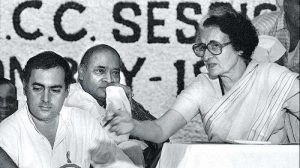 Media-reports also indicate that his dead body was not even allowed in party headquarters like was done, and rightly too, by BJP who even at party level gave due honour to former prime minister Atal Bihari Vajpayee. Such selected remembrance of prime ministers belonging only to Nehru-Gandhi family proves beyond doubt that Congress has lowered itself to position of regional parties where dynastic politics is the tradition.

Even Rajiv Gandhi could be remembered in true spirit by Congress by honouring commitments given by Rajiv Gandhi through Assam-accord signed by him rather than opposing and criticizing National Register of Citizens (NRC).