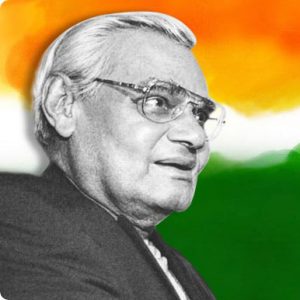 Not only India, the World has lost a global leader whose oratory skill was certainly unmatched in the entire Earth. Government of India shall diplomatically approach foreign countries so that foreign dignitaries from all around the world could come to New Delhi and attend the funeral of Dhruv Tara (Polar Star), Atal Bihari Vajpayee. And, the Government of India shall officially recommend the name of the departed leader for Nobel Peace Prize posthumously. It is well known that Atal Bihari Vajpayee made every effort for peace with Pakistan including calling Parvez Musharraf for Agra summit. His oratory skill was acknowledged even by a Congress prime minister when PV Narsimharao entrusted opposition leader Atal Bihari Vajpayee to lead Indian delegation to counter Pakistan.

Atal Bihari Vajpayee was undoubtedly most respected political leader in India who commanded respect from all political rivals. He was the only Parliamentarian either as Prime Minister or as Leader of Opposition, when all Parliamentarians cutting across party lines used to be present in the House to listen him without any interruption. Once even former Prime Minister Chandrashekhar from opposition camp in Lok Sabha made a personal request to Parliamentarians from opposition not to miss any moment from 40-minutes time-slot given to Atal ji by making interruptions. During discussions on Confidence and No-Confidence motions for Atal Bihari Vajpayee, even his political rivals were appreciative of his oratory skill by revealing that during their student-life, they used to miss classes to listen to Atal Bihari Vajpayee.

In the death of Atal Bihari Vajpayee, India has lost the last politician who through his wit and humour converted bitter moments in Parliament into laughter. Once the then opposition leader Atal Bihari Vajpayee challenged the then Prime Minister Indira Gandhi for a public debate at Ramlila Grounds, New Delhi. Mrs Gandhi tried to avoid by saying that Hindi of Vajpayee was beautiful. Lok Sabha was in full laughter with instant response from Vajpayee was that Indira Gandhi in herself was beautiful. His bold and tough decision to make India equipped with Nuclear Bomb will always be remembered.