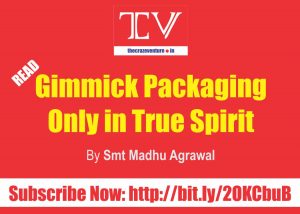 National Anti-Profiteering Committee under Department of Revenue and Department of Consumer Affairs should look into unfair tactics of manufacturers whereby they pack commodities in gimmick irrational packaging units. Commodities should be compulsorily packed in true metric-spirit of packs of 1, 2, 5, 10, 20, 50, 100, 500 gms-mltrs-kgs-ltrs to befool consumers by manufacturers. Goods packed by numbers should be only in packs of 1, 2, 5, 10, 20, 50, 100, 200, 500, 1000 and similar multiples of 1000 abolishing packing by dozens etc. Promotional added quantities publicised free with original pack should be within the main pack only to avoid shopkeepers keeping free packs themselves without benefitting the customer.

Presently soap-manufacturers pack 75 gms soap-cakes to look alike 100 gms packs, syrups are packed in 750 mltrs to look alike 1 ltr pack. It is significant that now system has been corrected even in respect of currency by adding missing denomination of rupees 200 notes.

Even medicines should be packed in similar system unless exemption is sought for units other than specified ones for dose-wise administration. It is ridiculous that even commonly advertised medicines like cough-lozenges are packed in strips of eight rather than normally ten because consumers judge price per strip rather than lozenges.