The Bureau of Indian Standards is the National Standards Body, representing International Organization for Standardization (ISO) for products except drugs and pharmaceuticals, and International Electrotechnical Commission (IEC) for products except telecommunication; under 14 classifications, the 1st classification specifies the National Flag. BIS has recently introduced the 15th classification for the Service Sector — Service Sector including BPO for being one of the major contributors towards the national GDP. “Since, Prime Minister Narendra Modi spoke for tourism from the Red Fort, on August 15, 2019, BIS is working with the stakeholders to incorporate tourism including adventure tourism in the BIS classification,” informed Smt. Surina Rajan, IAS (DG, BIS). 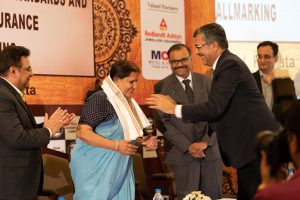 BIS has initiated the hallmarking awareness for general consumers in the last November, to protect the gems & jewelry industry. BIS for “Gold & Silver” refers to classification Metallurgy. “Earlier, the investment on Gold & Silver was considered as a nonperforming asset due to untrustworthy product quality, and the monetization process was not globally accepted. Currently, 40% of the market is practicing hallmarking, which has reduced under carat-age. Since, both the jewelers and the consumers’ preferences for hallmarking have increased since the year 2000; we expect to cover 60% of the market in the near future. BIS will organize several awareness programs to increase the confidence in the consumers, including jewelers,” Smt. Surina Rajan added.

BIS has partnered with IIT Bombay as Knowledge Partner for 1 year, for the digitalization of the hallmarking implementation process, to offer 100% assurance to consumers, and to facilitate jewelers to practice hallmarking — the process will be monitored by BIS on a real-time basis, and the hallmarking origin of the product can be traced from the BIS website.

“BIS has initiated to frame hallmarking mandatory for 20-carat and 23-carat jewelry. The same will be notified through the World Trade Organization (WTO) website for greater consensus among hallmarking centers, jewelers, consumers, and respective departments. BIS will also introduce a gradual provision to handle the existing jewelry for hallmarking,” Smt. Surina Rajan added.

BIS is also trying to standardize the display made by jewelers so as to reduce corruptive claims and also trying to minimize the difficulty level of adoption of hallmarking.

The Decline in Jharkhand, Goes Unlocked