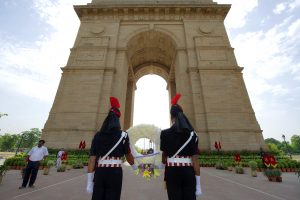 It refers to four more army-persons killed in Kashmir valley by Pakistan-sponsored terrorism. Union government always assures of fitting reply to Pakistan which often results in some persons of Pakistan-army or militants killed by Indian army. But such regular counter-attacks in no way prevent more killing of army-men.

Only and best remedy for permanent solution to Kashmir problem is to repeal articles 370 and 35A of the constitution to bring Jammu and Kashmir in national network without any special status. It is a well-known fact that supporters of Pakistan and militants helping anti-India forces are present in Kashmir-population. Abolition of article 35A of constitution will make such anti-India elements diluted and ineffective.

To counter political opportunism by opposition parties, Prime Minister after repealing articles 35A and 370 of the constitution through ordinance, can surprise opposition by announcing a snap poll seeking mandate of people on such drastic action to solve permanently the Kashmir unrest. Evidently, people will provide necessary mandate through a massive support for such a step if taken.