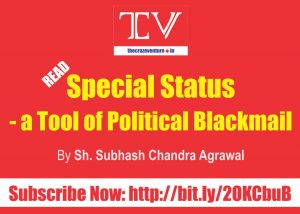 Andhra Pradesh Chief Minister N. Chandrababu Naidu in his 72nd Independence Day speech said his government aim to make Andhra Pradesh one of the top three states in the country by the year 2022 in terms of overall development and number one by the year 2029 further pledging vision 2050 for making the state emerge as the top destination of the world.

Such a carefully analysis makes it clear that it was simply a political blackmail while Telgu Desham Party withdrawing support from the BJP-led NDA government at the centre. Independence Day speech of N. Chandrababu Naidu makes it clear that Andhra Pradesh is much ahead of many other Indian states which need special status. Every state has its own challenges, and as such phenomenon of providing special status to any of the state should not be there at all which in present era of alliance-politics has become a tool of political blackmail by regional political parties.