Three families of the Tamli community have been preparing lime from Jhinuk (Oysters) in Kadiighat, South Dinajpur, for over 3 years. Limestone is prepared by burning the oysters in the large wool. The oyster is burnt in a large oven for 24 hours; then after squeezing the lime, are kept in water for three hours. Later, it begins to freeze after being coated with the cloth. 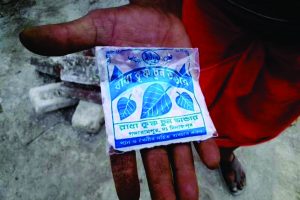 Lime makers Vijay Tamli and Bimal Tamli informed, “We buy the river oysters from various villages and make lime with the natural process. We sell it to the market in Ganj Hat. Almost all the money spent on collecting oysters from the village goes away in the makings.” Another lime maker Sanjay Tamli added, “We have not received any assistance from the government. Neither the local politicians nor the ministers of the area paid any attention to us. We seek help in sustaining the lime-based industry.”